Flights to Argentina in 2021

The best prices found for EZE flights for July, August

Cheap flights to Argentina found for this year

When is the best time to fly to Argentina?

The summer months are typically the busiest for flights to Argentina, although this does vary slightly depending on where exactly you are traveling. Patagonia and the Andes are much more enjoyable during the summer whereas the north of Argentina is more pleasant during the winter months of June to September. Buenos Aires is one of the busiest destinations in Argentina and as such you’ll need to make sure you secure your flight tickets in advance to avoid overpaying. The high season in Buenos Aires tends to last all-year, though spring and fall are the most popular because of the temperate weather. Sometime in February/March is the annual Carnival festival which engulfs the entire country. You’ll struggle to find flights to Argentina that don’t break the bank around the Carnival, so plan well ahead.

If you don’t mind cooler weather then head off during the winter to find the cheapest flights to Argentina. Despite the drop in temperature you’ll find that the weather is mostly dry and can be a great time to visit. Early October to early December is when spring takes over and you can find cheap flights to Argentina without the high season crowds, making your vacation more enjoyable

How long is the flight to Argentina?

Which airlines fly to Argentina?

Catch a direct flight from the United States to Argentina on American Airlines, Delta or United. Non-U.S. carriers offering direct flights include Aerolineas Argentinas and LATAM Airlines Argentina. If you have an international departure point, look at flights with Copa and Lufthansa

Getting to and around Argentina

Buenos Aires is the capital of Argentina and has the busiest airport. The Ezeiza Ministro Pistarini International Airport is the main one in use and is where you’ll no doubt fly into. It is a little over 13 miles away from the center of Buenos Aires and getting into town isn’t too difficult. It’s worth noting that there are no train or rail options available from the airport. There are, however, many private and public bus choices you can make. If you turn left after leaving the airport you should find the public buses with little trouble. They only operate from Terminal B. You’ll also need exact change so make sure you change some notes into coins. Manuel Tienda Leon is one of the main private bus companies. You can even arrange for a transfer directly to your hotel with them if you don’t mind paying. Finally, you can choose to hail a taxi. There are numerous taxi options. You can either find ones outside, pre-arrange one when you are securing your cheap flights to Argentina or take one from the Exeiza taxi desk inside of the airport.

The airport is around 6 miles from the center of Cordoba. The transportation from here is lacking, though. Your best bet would be to try to arrange transport once you’ve secured your flight tickets to Argentina. It’s also worth seeing if your accommodation offers any kind of shuttle service. Failing that, there is a regular bus that goes to the center of town, but the drivers are prone to refusing passengers with too much luggage (just bear that in mind when you’re packing). Additionally, there is a minibus service, so if you do end up with a lot of luggage, you could opt for that.

Argentina’s domestic flight network is reliable and planes are the easiest way to get around if you’re covering long distances. Depending on the route, flights can be even cheaper than buses.

Long-distance buses are also a good option and are equipped with a toilet, air-conditioning and even a bar.

Driving is another option but can be expensive. Cars can be rented to adults over 21.

While taxis are the most expensive way to get to the airport, they are also the fastest and most comfortable. City buses don’t cost much, but the ride could take an hour or two. If you’re flying out of an airport in Buenos Aires, arrive early, as they often get crowded.

See alternative destinations where airfare is generally forecast to be close to Argentina flight prices. 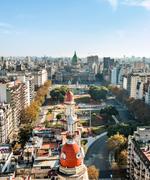 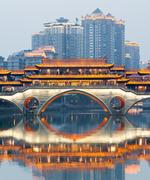 Select your preferred flight destination in Argentina from the list below.

Select your preferred route to Argentina from Qatar below

Not set on Argentina? See the cheapest flights to Qatar. Airfare prices updated on July 24, 2021.